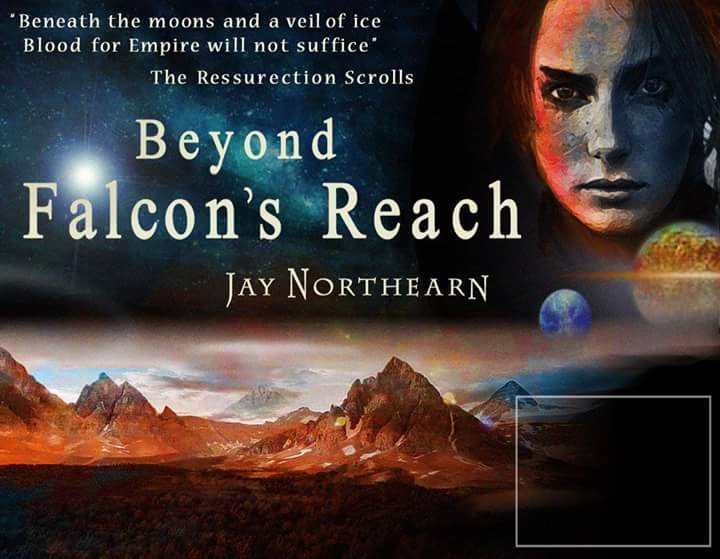 He hails from the UK, and has a degree in English and Arts. His writing has been featured on the site http://www.booksie.com and their Facebook page.

Look for the cover release and pre-order link in Spring of 2018!

The story bears a powerful vampire theme with Gothic, medieval and
steam-punk fantasy elements. The classic hallmarks of the genre are
subverted in two ways: the non-terrestrial environment, and
transformation from classic Gothic villain to haunted redemption
seeker. This takes place against the background of an ancient treaty
between land-folk and the blood-dependent mountain people, now at a
precipice as a new Ice Age converges and a rising evil in Farr City
threatens all. Craving power and near-immortality;
Mourde Cullis of Falcon’s Reach produces a mythical blood-elixir under
the auspices of a fanatical cult, but after capturing the daughter of
a Landmaster the consequences are disastrous. A colourful character
menagerie of different origins and outlooks must come together against
a sinister, absolutist threat.

Hours had passed since the gong had beckoned for supper while Mourde
Cullis stared at his fowl with cold intensity, his appetite no more
than a dull ache. He could have sat at this marble table forever,
draining all firelight but feeling none of its warmth.

A bell rang but he ignored it. His eyes rolled upwards to the
jewelled stars set into a vast dome of flaking gold. Tall pillars at
the edge of the rectangular hall challenged the vertical murk,
twisting upwards in vines of sculpted relief. Hateful illusions! No
true starlight shone from those stones, only glints from the flames
and projections of his own mind. Centrons ago he had commissioned that
night-sky folly for reasons he couldn’t imagine. Perhaps if he built a
scaffold and took a chisel he could … perhaps one day. In this game of
eat or not eat, he felt his desolation writhing like some half-living
creature within, slowing his heart to the very brink … To hold back
death. It could take a lifetime! A deep rumbling dropped trails of
brick-dust. The lowhands were charging the device below to a more
energized state. Here, in the rotting innards of Falcon’s Reach, a
fortress of decay where even the scurrying of rats upset a stone here
or floorboard there, repairs moved at glacial pace. The bell rang
again, this time with more urgency. He bid entrance, weary and
listless.

His steward, Chimes, entered with mincing steps. Before opening
his rouged mouth, he took a moment to flick dust from his tailed
maroon jacket. Genuine smugness languished beneath the face-powder,
and those painted eyebrows seemed especially arched. The white-wigged
lizard was stalling for effect.

“My Mourde! The Hunt has ensnared something most promising!” he announced.

Cullis groaned. “So you keep saying! Promising! Fascinating!
Enchanting! You run out of adjectives, just as I run out of patience.”

“I realize my previous exaggerations, My Mourde, but this one is
a true departure from the norm. Not only is the female captivating
beyond words, she has been arrayed for three hours and still fights
most deliciously, more than anyone so far!”

Excitement jolted his spine. Three hours! Most died before one,
and prime benchmark required at least five. For reasons even he did
not fully understand, the greater and longer the torture the more
enhanced the blood. Was there a land-folk specimen strong enough?
Modified blood from lesser spells had more potency, true, but
endurance sufficient for the highest level proved elusive as red
diamond.

Cullis rose to his full height, towering like his fortress, a
one-man slaughterhouse of unnaturally honed muscle. It took a moment
for his circulation to reach his head.

“You seem unsteady, My Mourde? Can I assist?”

“I’m fine. Are you sure about this one?” Cullis glowered. Chimes nodded.

Cullis knew he was addicted to this enhanced stuff – better than
tribute blood but so short-lived. When its severe withdrawal effect
set in, like a paralyzing rictus, then he would send the Hunt and
catch another young adult, but for more of the same? The Mourde had
trapped himself in a vicious circle. If these extractions failed to
give the ultimate prize soon, the Immaculate Condensive as his
paymasters called it, Cullis anticipated throwing every lowhand from
the highest tower.

This legendary blood worked very differently, according to the
ancient texts of faith, but the thought of his religious employers
made Cullis feel sick. To his mind, all people who pinned hopes to
supernatural entities were childishly deluded, and anything they
believed in of real promise, like supercharged blood, had a rational
explanation. Not that he would tell his employers his true attitude,
not as long as they were funding this whole enterprise.

“Send word I am coming!”

Cullis descended through bare-bricked corridors, crammed into the
depths of the high stronghold. Soot stained the torch-rings, empty of
brands. In their place were steady lights, powered by great wheels far
below where river rapids gave them rotation. Cullis felt pride in this
masterwork as he swooped past the glows, but even more he felt for his
latest machine.

Not far now, just beyond the arched doors of black iron which
pulled back with precise timing and caused no break in his stride. To
think, the lowhands had delayed him once, requiring him to knock like
some common hawker. The doormen were hooked by their snout-noses in
the smoke-house until they hung lifeless as the meat. It did not
happen again.

Within the chamber, a hulking cubic machine was installed; an
elaborate torture device of clamps and rods. It pulsed with the same
energy that fed the lights, filling the air with a metallic stink.
Black tubes snaked across the floor-cobbles into the contraption’s
underbelly.

The near-dozen team of lowhands, stunted pig-trolls from some
forgotten era, scurried around the chamber, overseeing controls and
ignoring the agonies of the captive. Cullis considered it a miracle
that such retarded beings could perform these tasks, but he had
trained their brightest with cruel diligence. In the way of all brute
breeds, whatever excited their most sadistic instincts was eagerly
learned.

All appeared to be in order, apart from the loosened muzzle
dangling over the subject’s breasts. Chimes was not exaggerating. Not
that looks mattered in any functional sense, but she was a beauty in
the finest bloom of womanhood. It was a shame how the nerve-sensitizer
paste stained her skin blue, for she had a perfect physique and her
waterfall of gold hair was matched by green fury in her eyes. The
Mourde climbed the metal steps and approached the frontal recess where
she was restrained. She was not like the others. Young land-folk
harboured such silly notions these days, especially cosseted brats
from Paleance with their fine clothes, villas in Farr City, rubbing
shoulders with mountain-people as if they were equals. How they
crumpled long before prime benchmark. Where was their fighting spirit?
Their animal rage?

“You bastard! My father will have your head for this!” she
yelled, showering Cullis with spittle.

Chimes was quick to explain, “The mouth-bolt failed. This can be
corrected, My Mourde!”

“My name is Tianna Fell and my father is Kaylan Fell, Landmaster
of all Dartingvale!” the girl retorted in fury. She writhed at a new
barrage of agonies.

Cullis sneered. “Landmaster! A sop-title for serfs who fail to
remember their place. So, you imply that you shouldn’t be here and
someone less worthy should?” Fascinated by her screaming contortions,
he waited for her answer.

“My father will never let this outrage go unpunished! You get
your tributes, as do all your kind! You have broken the treaty and
brought a storm upon your head, you imbecile!”

“Dusty old tribute-rites are meaningless here!” Cullis gloated.
“I’m aiming for something more potent and I will bleed thousands of
your kind, if that is what it takes!”

Cullis descended the steps so that he could watch from his
viewing chair. Just as designed, the probes attached to key
nerve-clusters reacted to her every struggle. This machine was
diabolically intelligent, sensing exactly when to lessen its grip,
inducing false hope, only to resume with precise timing, goading her
through torments both physical and mental. An arsenal of injected
chemicals prevented her from passing out. There was no escape from the
Autom’s embrace … none.

As the machine escalated its work, Cullis became aware of his own
rising tension. Though he did not believe in gods of any mystical
substance, he wished for one now. Squeezing his hands into fists of
iron, he poured all his hopes towards the great machine, then let his
mind climb higher, through the mass of stone floor and lintel, soaring
through dead-space to the very peak of the banquet hall dome … All you
stars, let this be the one!